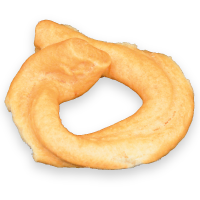 Where the word tarallo was born, we do not know for sure, the hypotheses are different: there are those who say it comes from the Latin “torrère” (toast) and those from the French “toral” (dryer). Referring to its rounded shape, someone thinks that tarallo derives from the Italian "tar" (wrap) or from the old French "danal" (round bread). The most reliable thesis, however, wants tarallo to descend from the Greek etymology "daratos" (sort of bread).

If the etymology is uncertain, we are sure, instead, of when the tarallo has spread and the motivation. We are at the end of 700, hunger ruled in the poor class, the bakers threw away nothing, not even "scrap" (the clippings) of the pasta with which they had just prepared the bread to bake. To the leftovers of leavened dough they added, to flavor it, extra virgin olive oil and white wine, products that were not lacking at that time, and they all baked. Only later was the technique refined with the passage in boiling water that boiled the tarallo making it more shiny and crunchy.

Since then the tarallo has not stopped so much as to be present today in almost all the houses of the country.